Dean has decided to start a keyboard club!!! It is designed for keyboard players who want to learn the tools and tricks their instruments have to offer. It will be on Thursday mornings at 11am and will be totally FREE! The first Thursday will be October 2nd so be sure to tell all your friends! 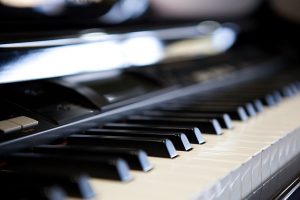 And now it is time for a story: (sung to the tune of The Brady Bunch)

It’s the Story, of a lovely lady, who was bringing up two hockey playing boys – her mother thought she needed a hobby, so gave her an organ to enjoy.

It’s the Story, Of a man named Irving, a bachelor all his days – playing music and driving fast cars, he was in an instrument selling craze.

Till one day this man met the lady, attending his keyboard club – Their eyes met and they saw the future and knew it had to be love.