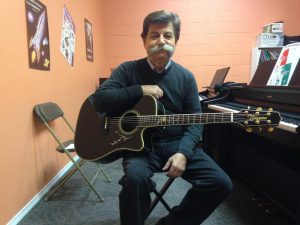 Anatoli started his musical career in the Soviet Union and has been playing for over 35 years with some of the top musical groups and orchestras, as well as releasing internationally acclaimed records with the group “Djelem”, and producing music for plays. His playing has been appreciated by worldwide experts of the field; with work ranging from composing and arranging to teaching and conducting. He achieved a diploma from the Cultural State Institute of Yakutsk majoring in conducting and minoring in composition, arrangement, and guitar. His career in Canada began in Eastern Canada playing individual shows, playing on radio programs, performing with circuses, being a studio musician, acting and playing with the Jean Duceppe Theatre, as well as numerous festivals in Eastern Canada and the US and working as a recording studio set up worker at Orange music in Quebec. Anatoli’s playing style ranges from jazz to pop and anywhere between including gypsy and folk. With years of playing and teaching experience Anatoli is sure to lead and inspire his students to become better musicians, we were so pleased to have him join our team in 2016.